A relatively new sport by Rye High School standards, the Boys? Squash program has grown leaps and bounds since its introduction into the Varsity mix a mere decade ago. It all started in 2006 when a couple of moms whose sons played squash decided to organize an informal playing group. At the time, about six boys were interested, so the moms organized court time at a local club. ?The kids absolutely loved it ? they couldn?t wait to get back on the court each week,? says Georgetta Morque, one of the movers and shakers. The parents loved it as well, adds Morque, because their boys were able to play with their classmates even though Rye High did not have its own courts.

As more and more kids became interested in the sport, the group of moms approached the administration, hoping to persuade them that Rye High should have a squash team. The fact that the school does not have squash courts didn?t deter anyone, and in 2008, Rye Varsity Squash joined the newly formed Fairwest League and was officially off and running.

Parents were (and still are) the backbone of this program, booking court time for practices at local facilities (not an easy task as squash is extremely popular and court time is hard to come by), coordinating matches with other teams, and coordinating transportation, as busing is not provided by the school.

Ten years later, the RHS Boys? Squash program now boasts a Varsity A, Varsity B, and JV team with 35 participants. Co-captains Jamie Abt and Charlie Greenhouse, both four-year veterans, have gained invaluable experience and camaraderie during their high school career. ?The program has really evolved over the last four years ? we have grown a lot as a team,? says Greenhouse. Abt adds, ?The last four years have been a lot of fun and squash has allowed me to make friends I wouldn?t have met otherwise.? 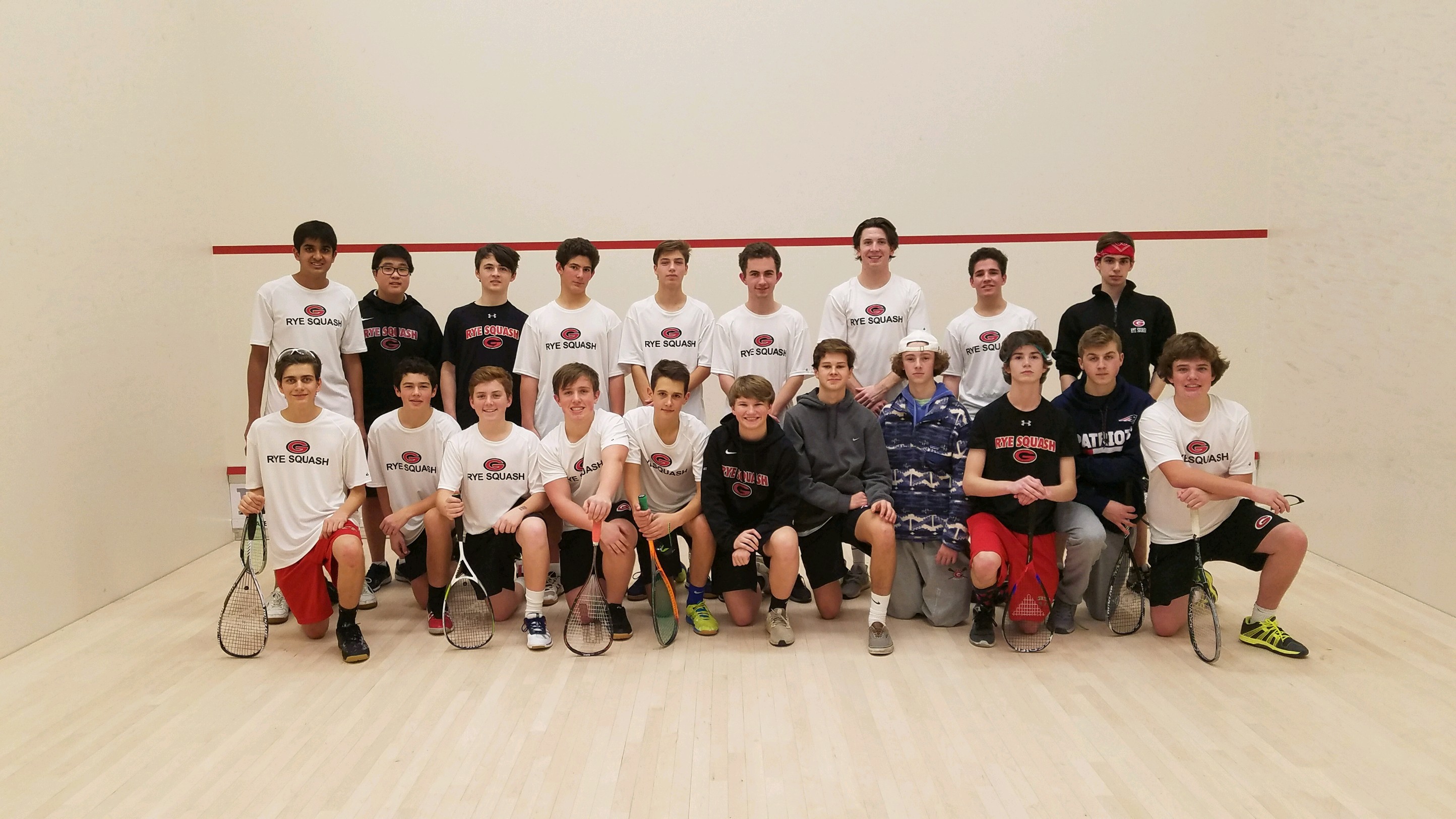 The Varsity A & B teams

The start of the season shows potential, with Varsity A winning two out of three matches at the Poly Prep tournament on December 2, and sweeping St. Lukes 7-0. Varsity B showed no mercy as they also beat St. Lukes 7-0 in their first match of the season December 5. Varsity A lost a tight battle to New Canaan 4-3 at Yale on December 8 but rebounded nicely against Greenwich with a 5-2 win. Varsity B did not fare as well at Yale, falling to the Staples team 7-0 and Greenwich B 5-2. With a jam-packed season including matches against strong teams like Rye Country Day, Darien, Bronxville, and New Haven, the boys will have their work cut out for them.

Coach Quan Huynh, who joined the program seven years ago but took a hiatus and returned last season, offers, ?The biggest challenge we face is coordinating the three teams, finding adequate facilities for practices, and scheduling competitive matches against public and private schools.? He and assistant coach Cody Blume both seek to create a positive experience for all the players and help the teams maximize their potential. Blume adds, ?Quan and I really want to build the program, and help the players improve their technical skills, foster an appreciation for the game, and continue to be competitive with other teams in our league.?

The season will culminate with Varsity A and B travelling to Hartford, for U.S. High School Nationals February 1-3, where over 60 teams from all over the country will compete in seven different divisions. ?Our players are determined, confident, and very competitive, which makes for exciting matches at Nationals,? says Blume. Both coaches agree that the tournament is a great bonding experience for the team and a perfect opportunity to see how all the players? hard work throughout the season pays off.

JV Team is featured image at top of article

Oh, the Places the School District Will Go...

Resident in the News John Donnelly