The Chinese, or Lunar, New Year has begun and it’s the Year of the Pig! To celebrate the holiday, and to delve more deeply into the meaning behind the 12 animals associated with the New Year, Curator Adam Chau, exhibitions manager at The Clay Art Center in Port Chester, has put on a delightful and thought-provoking exhibit called “The Great Race”.

The Great Race is an ancient tale that evolved over time to help teach the Lunar, or “old Chinese,” calendar, which dates as far back the 21st century B.C. According to the old way, a new year began on the second (or third) new moon after the winter solstice. Twelve animals were assigned to represent each year in a 12-year cycle; after 12 years, the cycle would loop back to the first animal.

Chau invited 12 artists — all of Asian heritage, representing five different cultures (Thai, Chinese, Korean, Japanese, and Vietnamese) — to select one animal from The Great Race. Each artist offers his/her own interpretation of that animal. For example, Sin-ying Ho, who was born in Hong Kong and divides her time between the U.S. and Jingdezhen, China, chose the Rabbit. The two glossy white rabbit-shaped forms were cast using a mold and then hand-painted with blue and white floral motifs inspired by the Ming dynasty. Several golden female figures stand among the flowers, recalling the spare beauty of a line drawing by Matisse.

Thai artist Vipoo Srivilasa, who hails from Australia, contributed three fantastical human-like characters with broad smiles, covered with dots, leaves, and flowers, each with a rooster emblazoned across its belly. Two of the figures are making peace signs with their fingers. We learn from the helpful wall text that certain animals from The Great Race are compatible; in this case, the Rooster shares the trait of patience with the Ox and the Snake. 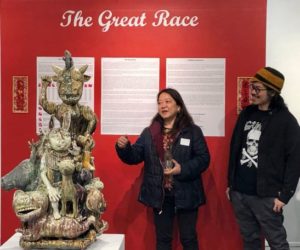 The impressive eight-coiled black and gold Snake by Kensuke Yamada is a celebration of pattern, texture, and rhythm. The animal is basically a vehicle for the artist’s wish to explore modes of creative expression.

Ayumi Horie emblazoned two deep-dish plates with boisterous Boars, replete with hooves and horns and prickly hair, further animating the characters by adding silvery “thought bubbles,” brimming with bold red letters from the English alphabet. The artist, who describes herself as half-Japanese, states, “I am careful about knowing my Japanese references from my Chinese, Korean, and Southeast Asian references because I know how important it is to move beyond a shallow and appropriated understanding of a culture.” 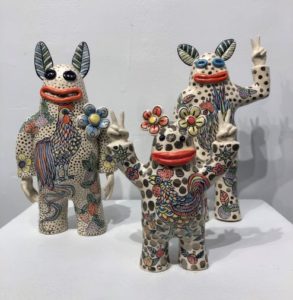 <You Dirty Rat> by Patti Warashina is not to be missed (little children will love it), neither is the red-tongued, very expressive Ox (<Switched Fates>) by South Korean-born artist Kyungmin Park. Park says she wanted to “create a figurative sculpture which shows the Ox’s frustration and anger when he realizes a little rat use him as a vehicle to win the race and become the first animal in the calendar!”

In selecting an example of his own work, Curator Adam Chau chose the Dragon. As you move closer to his Asian-inspired pot, you discover a pixelated surface comprised of miniature tiles of blue and white clay. As someone who describes himself as a “biracial Asian American” (no hyphen, on purpose), Chau wonders to what degree he may be “allowed” to draw from his Asian heritage for inspiration and a sense of self. “Blurring the image of the dragon is a question to what percentage your lineage must be in order to use cultural symbols. It is a statement of how I am quite often seen in the world; not quite 100%.”

Get Educated on the School Bond

Quarantine Film Festival: Movies That Hit It Out...

Dressing On The Side Guy Things: Trends for...

Making A Better Case For IPhones

A Master in Our Midst