Home NewsCity On The Record With City Council Candidates

On The Record With City Council Candidates

On the Record with

By Robin Jovanovich and Tom McDermott

On Election Day, Rye voters won’t have a lot of choice when it comes to the three open City Council seats, because the local Republican and Democratic parties agreed to put forth one combined slate. But the ticket is comprised of three respected individuals: incumbent Richard Mecca (Republican), Carolina Johnson (Independent), and Pam Tarlow (Democrat).

We had the opportunity to interview the two women, who are both running for office for the first time.

Johnson is originally from Bogota, Colombia. She moved to the United States to attend Columbia University Graduate School of Journalism and put that degree to good use, writing for Telemundo and CNN Español.

She and her husband and their two daughters moved to Rye in 2001, just before the September 11 attacks. For over a decade, Johnson has been a vocal member of the Rye Flood Action Committee, pressing for mitigation. She has also served as vice-president of the PTO at Osborn School, treasurer of the Rye Country Day School Parents’ Association, on the board of Kids’ S.P.A.C.E., and on the Rye City School District’s Strategic Planning Committee.

Tarlow and her family moved to Rye from Idaho ten years ago. She brings with her long experience in municipal government and works currently as Assistant to the Village Manager of Port Chester. Tarlow also has served on the Audit Committee of the Rye City School District. A few years ago, while raising her two daughters, she decided to become an activist, serving as a volunteer attorney to nonprofits and immigrants and refugees. “The 2016 election got me energized and the 2018 election pushed me over,” she said. 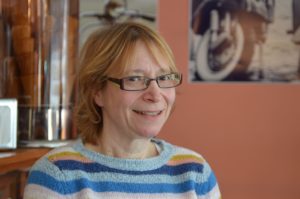 Both candidates think that a combined ticket will be a relief to most. “It’s not just on the national level that we’re living through divisive times,” said Johnson. “We just went through the school bond debate.” And while Johnson firmly believes in debate, she thinks now is the time for action on a number of issues facing the city.

Neither one is worried that a combined ticket will limit debate. “Put us together in a room and our values are the same. The weather changes, the economy changes, and we have to rise up to meet those developments.” She added, “There will always be plenty of room for debate in local politics.”

Tarlow was happy to debate the recent hiring of Rye’s new city manager. “I work in government and I think we should hire people with government backgrounds, not business backgrounds, to oversee our municipality.” She worries that President Trump’s filling of cabinet positions with business leaders has convinced people that this is a sensible path.

One point of debate prompted by Tarlow’s candidacy is: with the upcoming reconstruction of the former United Hospital property on the Rye/Port Chester border, will her role on the Council be diminished as she will likely have to recuse herself during all or part of the discussions. Tarlow has a ready answer: “There is only conflict of interest when there is some financial interest.” She added, “The previous Council administration failed to press its case on this project, and at this point there may not be a lot that Rye can do to influence the outcome.”

Johnson takes a different view: “We still must try to mitigate the impact of this project on the Rye Park (Hillside Road, Evergreen Avenue, Grandview Avenue, Ridge Street) neighbors and streets.”

In Tarlow’s city sights is sustainability as whole — sewers, storm drains, appropriate land use, including protecting our wetlands and providing incentives to preserve older homes.

When it comes to long-term quality of life goals, flooding remains at the top of Johnson’s list of concerns. “This is a public safety issue as well.” And she wants the Council to address the overdevelopment in residential neighborhoods.

At The Movies: “Parasite”

A Senior’s Perspective On The Graduation Conflict

Council Goes Ahead, Despite Merchant Outcry, to Keep...

Welcome to the Force

What To Do W/ The Nursery Field