There’s a reason Rocky Shepard has been playing hockey all his life and coaching the Rye Rangers for close to 40 years. “Hockey is fun, fast-paced, and exciting. I love it and the kids love it. There’s nothing like looking through their masks and seeing a big smile.”

Last year, when Nick Jovanovich of The Rye Record learned that Shepard was in “retirement mode”, he asked him to host a podcast on his favorite sport, other than tennis. Player, coach, and now host of “All Things Rye Hockey”, one might call it a hat trick. The second season began last week and runs through March 15.

“Every person I interview has a unique backstory about how they came to love the game,” offered Shepard, who played hockey all four years at Amherst College and had a try-out with the NHL’s California Golden Seals before going on to a long and successful career at Hearst.

Shepard’s backstory is that he was getting into mischief as a young boy and his mother realized that he needed an outlet. She heard good things about the Greenwich Skating Club and Rocky became a rink rat at the age of 5.

His enthusiasm for the sport and easy conversational style helps break the ice with guests every time. And what an interesting roster of guests he’s had on the show, among them former star Princeton player Terry Morris, Rye Rangers President Eric Bommer, and Christine Broestl Niejadlik, a mother of four who trained at USA Hockey and is now a Rye Rangers coach. 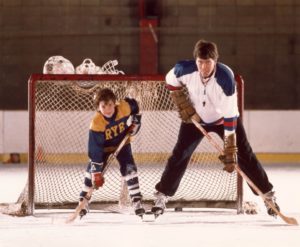 Coach Rocky with his son, TR, at a Sports Illustrated shoot

“All Things Rye Hockey” is not only entertaining, but also educational for parents of young interested players and players on the rise, and it’s the perfect medium through which to highlight the Rye Rangers long history in the community and bright future.

Established in 1972, the nonprofit now has 450 kids enrolled, a growing number of them girls. “The program has doubled in size in the last ten years in great part due to its organization, proximity to three NHL teams, and the great job we’re doing with the Mites, players 8 and under,” said Shepard. In fact, the Rye Rangers is one of the fastest growing youth hockey associations in the country.

Coach Rocky wasn’t one of the founders of the Rye Rangers, but he became involved with it in its infancy, soon after moving to Rye 41 years ago, and is one of its rocks.

Currently the oldest member of the Rangers Men’s Hockey team, as well as its general manager, Shepard shows no signs of slowing down. He’s had injuries and surgeries, which sidelined him for a few weeks, but he’s never stopped playing. 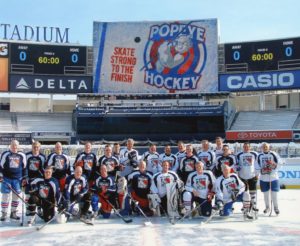 “I don’t consider men’s hockey dangerous. Our games are 75 minutes and they are intense, but we respect one another and don’t get into brawls, because we can’t show up at the office the next day with a black eye or a broken nose,” he said with his signature dry wit.

He’s coached countless kids, including his own three, and for the last three years has coached his grandson. “I love working with kids, and it’s been exciting to watch them — and their children — reach new heights on the ice. With ADM (American Developmental Model), the young mites learn all the skills in a tighter area and have more contact with the puck.”

He added, “Did I mention that this game is fun?”

Listen to Rocky Shepard’s “All Things Rye Hockey” on http://ryerecord.com

Considering the landscape at the Easter Egg Hunt

On a New Learning Curve

Where Are They Now?

A Bit of Personal History

Laughter Is The Best Medicine

Rye Mom’s Were No Contest Against Nathan’s Champ...