Garnets Throttle Harrison and Hen Hud as Playoffs Near

Garnets Throttle Harrison and Hen Hud as Playoffs Near

Rye High played a rough non-league schedule to begin the 2019 lacrosse season. And no team is rougher than the group they met in their opening game, the John Jay Indians. John Jay-CR is currently the top-ranked squad in all of Westchester and Putnam. When the young Garnets held the Indians that day to an 8-6 score, Head Coach Steve Lennon knew he had the makings of a real contender.

Afterwards he said, “We were in it all the way. They threw a 10-man ride against us, and we didn’t clear the ball as well as we needed to.” (For 10-man ride, think full-court press.) 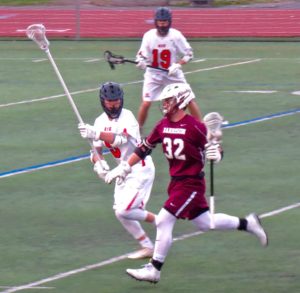 Okay, fast-forward to this week. The Garnets hosted Harrison High Saturday night, and they handled the Huskies’ pressurizing defense so well they were able to get off 46 shots. The fact that only eight of them found the net is a tribute to Harrison goalie Ryan Kaplan, an eighth-grader and the youngest player in the league. He made 10 saves on the evening, many of them from point-blank range.

Rye’s own youth movement is extremely impressive as well. Ninth-grade faceoff man Johnny Hartzell won 13 of 15 at the X, most of them clean wins within two or three seconds of the whistle. Classmate Caden Whaling was all over the field, breaking up plays on defense and taking seven shots on attack, scoring a goal and adding an assist. Junior attackman Tommy DeCaro was his usual efficient self, scoring four times on only six shots.

But, quite possibly, the real story is being played out on the other side of the field. All four team captains make the defense their home and one of the best in Westchester. Seniors Pat Langer and Ellis Tucci, and juniors Brendan Lavelle and goalie Emmett Carroll anchor a veteran defense that, all by itself, gobbled up 11 loose balls against Harrison, more than the Huskies’ entire team was able to manage. No wonder Rye took their measure, 8-4. 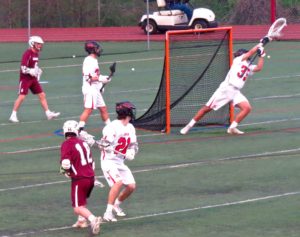 Hendrick Hudson is supposed to be one of the title contenders in Class C. Make that pretenders. Two days later, the Garnets sank the Sailors on both ends of the field for their fifth win in a row, 15-2. Caden Whaling netted three goals and an assist. Tommy DeCaro, senior Sam Poole, ninth-grader Owen Kovacs, and his classmate Johnny Hartzell added two goals apiece. Hartzell won 16 of 22 draws. Defenders Tucci, Lavelle, and ninth-grade defender Aidan Cunningham were all cited by their coach for their lockdown play.

Wednesday’s affair was even more of the same. Rye overwhelmed Edgemont 19-1 as

Danny Fitzgibbons had four goals and two assists, Liam Hurley added three goals while DeCaro, Poole, and and Jack Bartlett each had two.

The season’s finale should be a doozy: The Garnets travel up to Yorktown to take on perennial powerhouse Yorktown, the #2 team in the Section 1 rankings. (Trivia tidbit: More players in the current NCAA lacrosse championships went to Yorktown than to any other high school in the country).

Under the Stars Patron Party celebrates event supporters and honorees

Wildcats on a Tear

Panthers Play To A Draw

NEEDS A GRAPHIC HEM AND COLOR?

Joy to the world