Home Sports Golf Getting Back in the Swing

At Westchester Country Club, cups are now raised above the lip of the hole to avoid contact, and a shot hitting the cup is considered holed.

It’s been a start to the golf season unlike any other.

As the end of a mild winter yielded to early spring, the sizable contingent of golfers who call Rye home looked forward to a long season on the links.

But as golf bags were being taken out of storage, society as a whole began to slow down – eventually stopping – amid the coronavirus pandemic, and golf was no exception.

Following public health guidance issued by Governor Cuomo on April 10, golf courses in New York State closed to play at a time when players were aching to tee off. When courses reopened to play just over a week later, public health measures introduced social distance into what has traditionally been a social game.

No carts. No rakes in the bunkers. Don’t touch the flagstick. Stay six feet apart.

Suddenly, there were rules more important than the ones promulgated by the USGA and the R&A.

Nonetheless, the enthusiasm for the game at Rye’s three golf clubs – Apawamis Club, Rye Golf, and Westchester Country Club – has not been dampened.

Tee sheets are full, even on weekdays, as courses face increased demand from members who used to commute find themselves at home.

“Golf lends itself to social distancing, so I think the members are all appreciative that this is a place to come, a safe haven where you can go and get some recreation and feel, ‘I’m not jeopardizing my, nor anyone else’s, health,’” said Rye Golf Club head professional Mike Rapisarda. 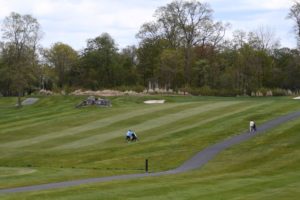 At Westchester Country Club, where only the South Course was open to start the season, demand has been such that tee times are awarded via lottery. “It’s been high. We’re maxing out the course,” said Ben Hoffhine, Director of Golf.

And it’s the same across town in the shadow of Whitby Castle.

“We’re definitely up, in terms of rounds played,” Rapisarda said. “I couldn’t give you an exact number, and even though we’re running tee times at 12-minute intervals, people are coming out to play.”

And while plenty of players have been hitting the links, competitions and events have had to be shelved due to uncertainty stemming from the pandemic.

Season-opening scrambles have been scrapped, and several of the early-season qualifiers and championships run by the Metropolitan Golf Association have been postponed or cancelled.

“We hold 19 MGA championships in addition to the Westchester Golf and Long Island Golf association events and qualifiers,” said MGA President Tod Pike, who belongs to Apawamis. “There have been a number of cancellations already, and some postponements. We’ll know more about the schedule and what else needs to be moved come June 1.”

On the club level, it’s unclear when club competitions will begin, but the demand is there.

“We cancelled the season-opening scramble, but we’re hoping to have a schedule of tournaments,” Rapisarda said of the RGC slate. “We’ve opened sign-ups for the Governor’s Cup and Player’s Championship, and we’re more than half-full on both.”

It’s likely that before both local and MGA tournaments can be played, New York state will have to allow more people to return to work at the clubs.

“I think the biggest thing you’ll see restrictions lifted on are carrying your own bag or using a pull cart. You’re going to see a lot of single riders in carts, and we’re hoping because of that, we’ll see more people walking,” commented Hoffhine.

Rye’s three courses are currently working with roughly a quarter of their usual maintenance staff. Working with a limited staff, Westchester held off on opening the famed West Course, which will host the 2021 U.S. Women’s Amateur, until May 15. For the time being, it will only be open Fridays, Saturdays, and Sundays.

“Is it going to be a full tournament calendar? Probably not,” said Hoffhine. “But people want to socialize and get together, and people want friendly competition, and we’ll do our best to accommodate them. I’m sure we’ll be able to put together a nice calendar of events for our members.”

The pandemic has also forced pro shops to close their doors to customers. “From a retail standpoint, we’ve missed two months of the prime golf club and clothing selling season,” Hoffhine said.

While the pandemic has hit the golf industry, both Apawamis and Westchester have been able to give back to the wider community. Pike noted that Apawamis has been providing food to Bread of Life, an organization based in Rye that provides meals to the less fortunate. Westchester has provided meals to members of the Rye and Harrison Police departments and the Rye/Rye Brook/Port Chester EMS.

There’s no doubt that when the pandemic slows down and the guidance on social distancing is lifted, the world will be changed. Golf will change, too.

“You can’t set up all the protocols without the cooperation of the membership, and everybody has been wonderful and understanding. That’s been the best part about this,” said Rapisarda. He added, “When we get to the other side of this, the future’s bright.”

Hoffhine agrees. “I think golf is in a really good place because it’s one of the few sports you can coach and teach from a distance. My hope is that the general population will see the same things I do and flock to the game.”

The Girls of Summer

The Extraordinary Success of College Squash