At the IIHF World Junior Ice Hockey Championships, held December 5 through January 5 in a “bubble” in Edmonton, Alberta, Trevor Zegras of Bedford, N.Y. led Team USA to the Gold Medal, besting Finland 4-3 in the semifinals and host Canada 2-0 in the finals. Along the way, Trevor was the tournament high scorer (seven goals, 11 assists) and won the Most Valuable Player Award. Although he played all his youth hockey in Connecticut, followed by prep school (Avon Old Farms), the USA National Development Team in Plymouth, Michigan, and one prolific year at Boston University, his roots run deep in Rye.

Trevor’s great-uncle, John Zegras, better known as Ziggy, was a Math teacher and Varsity Hockey coach at Rye High School from 1975-1992; under his leadership, Rye won ten Sectional Championships and became one of the most respected programs in New York State. John also coached the Girls’ Varsity Hockey team at Rye Country Day School for four years. Two of John’s best players were brothers Gregg and Gary Zegras, who is Trevor’s father. After the Zegras brothers played college hockey, they returned to Rye to coach for the Rye Rangers Hockey Club and to play competitive amateur hockey up and down the East Coast.

Trevor is a consummate athlete. Growing up, he played tennis at Manursing Island Club and won several club championships, including the Parent Child Tournament, where it was clear that his father was along for the ride. DJ Geatz, Head Tennis Professional at Westchester Country Club, who was an instructor at Manursing at the time and played tennis at the University of Minnesota, said, “Once I found out Trevor was a devoted hockey player, I knew there was no chance that tennis would dominate his future, but he could have gone very far.” 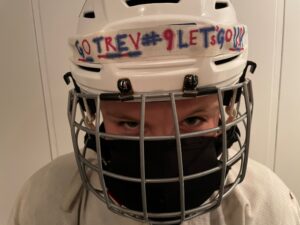 Hours after the World Junior Championships concluded, Trevor was whisked away to Irvine, California, for his first NHL training camp. Trevor was a 2019 first-round draft pick (#9 overall) of the Anaheim Ducks, and there is a very good chance that he will start the season this week in the NHL.

Although Trevor has been very busy with his hockey career, he has taken the time to be a great role model for kids, signing autographs and offering helpful advice. Many of those kids, especially in Rye, will be rooting for Trevor for many years to come.

The Extraordinary Success of College Squash