Aerial view of the backyard at 19 Manursing Way

When Nancy and Michael Neuman moved to town in 1968, it was to a Colonial on Rockridge Road, where they immediately felt at home. But as their three sons grew up, it was either expand the house or burst at the seams, recalls Nancy. Michael came up with another plan when he saw a for–sale sign on a prime piece of vacant land while riding his bike along Manursing Way.

So, they built a house, designed by Darcy Gibson, a local architect they’d met at a Rye Arts Center event.

While Nancy prefers older homes steeped with charm and character, “when we bought the property in 1977 no one was building homes that looked old.” Nine months later, their family of five moved all of one block to a private getaway that seemed worlds away from their old neighborhood. 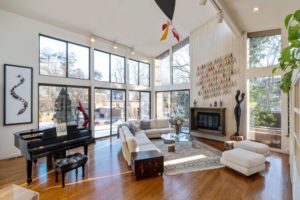 The high-ceilinged and light-filled living room

What have the Neumans enjoyed about their contemporary six-bedroom home these 42 years? Just about everything, from the spectacular sunken living room to the atrium sitting area to the sprawling backyard where they’ve played and entertained with abandon. Everyone in the family, including the grandchildren, has taken full advantage of the tennis court, the heated swimming pool, and the soccer field. In the off-season, the younger members have played ice hockey on the pool and rollerblade hockey on the tennis court.

Having decided that the time had come to scale back, the Neumans recently put “Camp Neuman” on the market. They know they are in good hands because their son Richard is the listing agent.

A Rye realtor since 1972, Nancy — who started her own agency, Country Properties, which she later sold to Coldwell Banker but continued to run until last year — allows that selling her own house is not as much fun as selling other people’s houses! 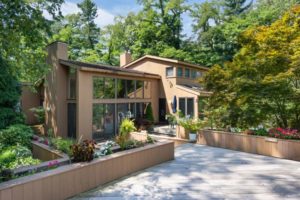 The private deck is surrounded by lush landscaping and includes a Jacuzzi hot tub that gets year-round use. His and her cabanas and a full kitchen are close by.

“It’s so hard to be totally objective. I asked for input from my realtor friends and colleagues, and I listened to what four stagers recommended,” says Nancy. “One said paint the red room white, another said paint the paneling… I didn’t invite their opinion on the master bath walls, which were hand-painted by our friend and neighbor Bunny Clark. In the end, Michael and I determined that decluttering goes a long way, and I did remove some of the furniture.”

What will Nancy and Michael miss most about life on Manursing Way? Walking the “Loop”, which has been a ritual for Nancy. The serenity and the winter views.

While the Neumans don’t know where they’ll move, chances are it will be further than the next block, but they won’t be going far.

Rye’s Up: SHOW YOUR SUPPORT FOR RYE’S BUSINESSES

Soup and Lots More for 40 Years