George Kirby was surrounded by family and friends when he was drafted by the Seattle Mariners.

George Kirby, a 2016 Rye High School graduate, heard his name called with the 20th pick in the Major League Baseball Draft on Monday night. Surrounded by family and more than a hundred friends, the former Garnet mound ace was selected in the first round by the Seattle Mariners of the American League. 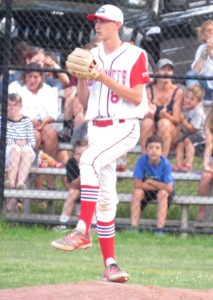 George Kirby on the mound for the Garnets back in 2016.

Kirby played his baseball for the last three years at North Carolina’s Elon University, where he earned Colonial Athletic Association Pitcher of the Year honors in this, his junior year. He did it with a fastball that touches 98 mph on the radar gun combined with elite control. This season for the Phoenix, Kirby struck out 108 batters while walking only six, the best collegiate strikeout-to-walk ratio in the country.

Amid the celebration at home he said, “This year something just clicked for me. I’ve been able to work on my mechanics, work on developing a fluid delivery.” Major league mound ace Trevor Bauer marveled at Kirby’s command when he was interviewed on the MLB Network draft show. “Six bases on balls? I can do that in a single game!”

The Mariners aren’t the first big-league team to draft Kirby. The New York Mets selected him in the 32nd round after he led the Garnets to a league title in 2016. He said, “I’m a better, more mature player now. And it’s not just about getting older. Going to college allowed me to face a lot of great hitters, especially in the summer Cape Cod League where you have ACC and SEC guys.”

As a star from the metropolitan New York area, Kirby received an invitation to attend the draft at the MLB Network studios in Seacaucus, New Jersey, but chose instead to watch at home on Midland Avenue with friends and family. His professional career will start most probably with the Mariners’ short-season minor league affiliate, the Everett AquaSox, across the country in Everett, Washington.

Vote “No” and Let’s Get the Bond We Need

Far Out and About