Paddle tennis fans are in for a treat when the sport’s best players converge in Westchester and Fairfield counties for the American Platform Tennis Association (APTA) Men’s and Women’s National Championships March 5 through 8. While the Country Club of Darien is the host club, early-round action will take place at 30 local clubs, including three in Rye — Coveleigh, Manursing, and Westchester. In the mix are a number of Rye teaching pros, all striving for a title along with some 500 competitors from across the country.

Now in its 85th year, the tournament is a showcase of top racquet skills and athleticism. On the women’s side, all eyes are on Florentina Hanisch, pro at Westchester Country Club, who, with her partner Annica Cooper of Bedford, won the Women’s Nationals in 2017. They have since climbed to the top of the APTA Women’s national rankings.

“This is the most prestigious paddle tournament of the entire year, and all the players look forward to it,” said Hanisch, who has been drilling with Cooper and their coach Gerri Viant and reviewing past matches to help with strategy. “I’d trade the four titles I won this year for the nationals title in a heartbeat,” she added. Originally from Brazil, Hanisch, at age 16, was ranked 7th in tennis in South America and competed on the WTA doubles tour. She is also an APTA mixed doubles national champion with her husband. 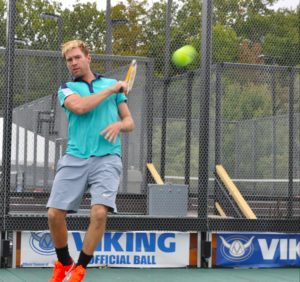 On the men’s side, Mark Parsons, four-time men’s national champion and former Manursing head pro, continues to lead the way. He and his partner Juan Arraya from Greenwich Country Club won the men’s nationals last year and are hoping for a repeat performance.

Other top local contenders include George Wilkinson, Manursing’s head pro, who has a history of tournament wins; Andrea Bonfigli of Coveleigh, who has consistently ranked among the top 20 teams; and Harry Walsh, former pro at Apawamis. 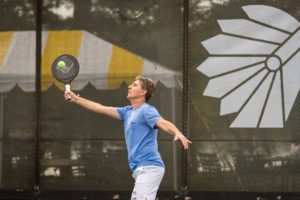 It’s not unusual to find former top professional tennis players, especially distinguished doubles players, on the platform tennis courts. Expected at this year’s APTA nationals is Jared Palmer, who held a No. 1 world ranking in doubles and is the winner of 28 doubles titles, including the 1995 Australian Open and 2001 Wimbledon. Eric Butorac, winner of 18 doubles titles during his 14-year professional tennis career and currently director of Pro Tennis Operations and Player Relations at the USTA, is also expected to make a strong showing.

On March 5, the APTA will hold the Men’s and Women’s Viking President’s Cup, an annual inter-regional competition. Members of teams in each of the APTA’s seven regions play in qualifying tournaments to earn enough points to be selected to represent their region in this event.

All are invited to watch the matches free of charge. Fans can also keep up with the action through Internet broadcasts at www.platformtennis.org.

A Quiet Roar for an Outstanding Scholar Athlete

An Historic Season That Ended Before the Big Game