All bets are on tennis netting its best season in years. College kids are home; vacation plans are on hold; sleepaway camp is not an option; and adults who haven’t played in years are calling their clubs to schedule lessons.

The City has been working to reopen its public tennis courts, beginning with Disbrow Park, according to Mayor Josh. “This requires staffing and implementation of health and safety rules.” The courts were set to open around Memorial Day.

The private clubs, which were required to close due to the pandemic in mid-March, started slowly reopening the courts in mid-May, first to members of the same family only. Members are now allowed to play singles with other members. No guests allowed. Only every other court is open to ensure social distancing. The pros wait for clearance from the government before they take any steps forward.

It’s not tennis as usual. The Women’s Leagues, which normally start up in April, were cancelled. No decision has yet been made about the junior MITL season, which begins in June.

George Wilkinson, Director of Racquets at Manursing Island Club for five years, says he is proactively planning singles ladders for both adults and juniors who want to stay in the game and compete. One annual camp program that is going forward on schedule at Manursing is Intensive Tennis for ages 7 and up. “We can set up a controlled environment on the courts with children that age. Social distancing is harder with kids younger than 7,” he said.

With 300 active racquet families at Apawamis Club, Stjepan Beg, longtime Director of Racquets, said there is tremendous pent-up demand. “Members are eager to get back on the courts. They reach out to us every day for updates. I and all the other pros are going to have to come up with creative ways to meet the demand and make it a safe and enjoyable season. We’re all waiting for the green light on doubles play and some form of team tennis being allowed.” 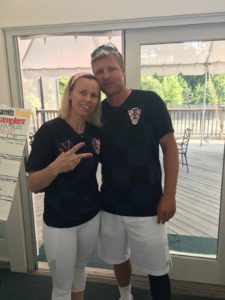 Reopening tennis is not just step-by-step, said Wilkinson, as much as test-by-test. “The first one was allowing members to play singles with a family member. Everyone obeyed the rules, so we’ve started permitting members not in the same family to play singles. That seems to be going according to plan, so we’re moving ahead with lessons. If they are semi-private, members have to play on opposite sides.” Manursing, added Wilkinson, is fortunate to have 12 courts.

DJ Geatz, Tennis Director of Westchester Country Club, said, “We’re a long way from holding tennis clinics, so private and semi-private lessons are the only instruction we can offer for the time being.” He added, “We may have to adjust pricing because privates, at $110 an hour, cost at least twice as much as clinics.” 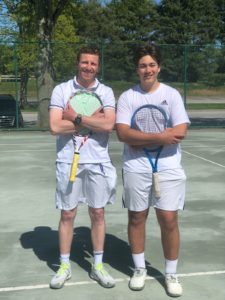 Fortunately, Westchester has five lit courts, so members can play past dusk if they’re so inclined.

One of the big losses for the clubs, and those head pros who receive a percentage of sales, is that the pro shops are closed.

For all the pros, it will be a long ladder up to earning the money they did in previous seasons. How did the furloughed pros handle the unexpected time off? “Many grew beards and did push-ups,” reported Geatz. “Some were lucky enough to teach at private courts. I hit tennis balls with my 3- and 6-year-old sons on our hill.”

Wilkinson moved the couches out of his living room by himself and turned it into a gym. His top teaching pro, José Salazar, did bench presses and started running again for the first time in years.

Signs are prominently displayed at each club outlining strict protocol until further notice: no racquets may be shared; gloves are required and are available, along with hand sanitizer at stations next to the open courts; players must bring their own water and balls with them and bring them home.

Salazar is a born optimist. “I believe that by the beginning of July we’ll be offering ladies and junior clinics. All the pros are hopeful that the Richardson Invitational Men’s Doubles Tournament will be held for the 59th year at Manursing this August, especially Salazar, a young Spaniard who has won it twice.

Creating Yards of Fun and Function

Ready for the Big Leagues Now