When Rye residents heard that the old farmhouses, the modest Cape with the multi-colored tile roof, and the red barn on Locust Avenue on the south side of Blind Brook were being torn down to make way for a complex of condos, many were on the fence about what the future would hold. But once residents saw plans for the three-story units, the landscape suddenly appeared a lot brighter.

Paul Varsames, the developer and visionary behind the project, which is appropriately named Locust, told us that it took 45 years for the man he bought the 1.3-acre parcel from to consolidate the downtown property.

“Our primary buyer is the downsizer who wants one-level living,” said Varsames.\ 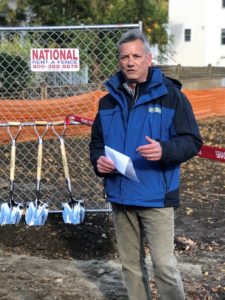 Paul Varsames on the day of the groundbreaking, November 8

How will Locust compare to The St. Regis Residences going up on the Old Post Road? “The St. Regis is great for people who are amenity-driven. Our amenity is proximity to the town and train.” He added, “We have no age restriction and I feel that it won’t be difficult for a family to transition from their home into one of ours. We will have windows on all four sides.”

All of the eight Locust condos —four separate buildings of two units each — will be three-bedroom, three-and-a-half baths; six of the eight will have separate offices. They range in square footage from 2,259 to 2,860. They offer private outdoor seating areas and multiple outdoor living spaces. The garages are on grade and a private elevator takes you to your unit.

For Monique Varsames, a former teacher who grew up in a family of builders and has worked on 75 projects with her husband Paul, Locust offers “convenience with pizazz! And you’re not giving up any entertaining space with these floorplans.”

Realtor April Saxe, who has had a long working relationship with the Varsames, adds, “I think these condos are a welcome change. And I think they are a perfect fit for people interested in ‘rightsizing’”.

After choosing Hartford-based Tecton Architects, whose work they had seen in downtown New Canaan, the Varsames hired local landscape architect Richard Horsman. “Before we bulldozed anything, Richard tagged all the trees, noting their size, variety, and condition. We will replace four times the number of trees we had to remove and many of them will be canopy trees, which will provide privacy, beauty, and shade,” said Paul.

Paul Varsame is proud to report that the level of finishes on the outside are just as important to them as on the inside. To ensure that Locust living is quiet as well as easy, they hired a sound engineer.

The Varsames love Rye so much that they not only consolidated their offices and showroom under one roof at 46 Locust Avenue, next door to the complex, but moved to Rye from their horse farm in South Salem. Their son wanted to go to Iona, so that sealed the deal.

For those planning and dreaming ahead, the expected occupancy date at Locust is February 2021.

Has “Cancel Culture” Gone Too Far

A Doula Is Born

SPRYE Sees Seniors Through the Pandemic

The Timeless Story of Kathy Zaltas

5 Steps to Five Announces Luncheon, And It...

For Outstanding Volunteerism, the Award Goes to…