Home VideosBe Glad You Are a Yankee Fan Twin Powers!

Of the Wildcats Field Hockey Team

Their journey began in August 2015, when as eighth-grade transfers from Greenwich Country Day School they stepped onto the Rye Country Day field not knowing anyone. “All we knew about them,” Coach Georgette Summers recalled, “was they were twins who played ice hockey. After pre-season we had more information: They were talented field hockey players and they smiled when you spoke to them. They came to practice every day, listened carefully, played hard, and kept smiling.” 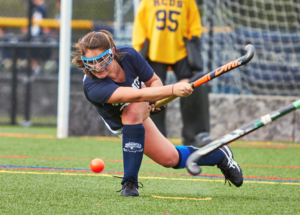 Elizabeth now has 15 varsity letters under her belt, playing three varsity sports — field hockey, ice hockey, and golf — all five years, and Olivia has earned 14 (all but varsity golf in eighth grade).

“Elizabeth had a breakout game in eighth grade. We were playing in the NYSAIS semifinals against Holy Child, here at home. The game went into OT. I can still see the slow-mo image in my head of Elizabeth getting by a Holy Child defender, shooting as she was falling, and scoring as her body hit the ground. It was fantastic. That season we went on to play Hackley in the NYSAIS championship. We took them to OT 7 vs 7 and then OT strokes. We lost. That loss must have festered in Olivia’s mind. The next year she came out and tore up the field in the NYSAIS finals. We have not lost a NYSAIS Championship game since.” 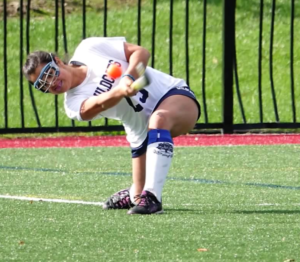 The Friedberg girls are quiet and self-effacing, but they love talking about their teammates and coaches. When asked what they will take away from being part of the Rye Country Day Field Hockey team, Olivia said, “Through every season, as part of the Wildcats, my teammates helped me learn so much about myself and helped me grow. I hope I’ve been a good influence on them as well, both on and off the field”. Elizabeth said, “As I look back at the past five years, the days and the months blend, but I can remember each field hockey season so clearly.”

The sisters took to the ice as 6-year-olds at the Dorothy Hamill ice rink, playing house league with their brother and Canadian-born father (who was their coach) in the winter. In the fall they played club soccer. Ice hockey was their first sport, and they have played it every year since — for their schools, their clubs. They feel it was the combination of ice hockey and soccer that provided them with a better understand how to play field hockey.

Olivia and Elizabeth were also elected team captains of their varsity Ice Hockey team and helped win the WIHLMA Miran Division Championship in 2016-17 and 2018-2019. As for golf, in the summer of 2017 they found time to win a silver medal at the Maccabi Games in Israel, playing on the USA Junior Golf team.

Powerhouses on the field, the ice, the course, they are equally focused on academics and volunteerism. They both excel in Math and Science, run a food blog, teach programming to underprivileged children, and volunteer at the Malta House women’s shelter in Norwalk, and at food kitchens in New York and Connecticut.

The next chapter of their lives will take place at Cornell University, where they will be on the Field Hockey team next fall. Elizabeth looks forward to developing her interests in math, computer science, and creative arts. “I hope to be able to build a business which helps people feel good about themselves, protects the environment, and which can thrive. Olivia plans to bring her passion for cooking, coding, and design to the hotel and food industries.

Coach Summers said she would miss Elizabeth and Olivia, “whose twin powers are unstoppable.”

Lots of Local Winners at Counties