Edgemont’s Jim San Marco was one of the winningest coaches in all of high school sports. His boys’ teams had a 19-year record of 188-16. For the past seven years, the tournament named for him and overseen by tennis pro Jeff Menaker has brought together the best teams from Westchester, Long Island, and New York City at the height of the season.

This year, Rye Country Day was invited to the Big Dance and they made the most of it. Playing three singles and three doubles matches against Manhattan’s Trinity School last Saturday on the windblown courts of Harrison High School, Head Coach Tim Shea’s squad advanced on the strength of wins in all three singles matches and a victory by the Max Weinstein/Andrew Felton third-doubles team.

In Round Two, a somewhat depleted Bronxville team was easy pickings for a Wildcat squad that handled the blustery conditions better than anyone else, thanks to their practicing on the always-windy courts of SUNY Purchase. The 6-0 win placed them in the finals of the eight-team tourney.

On the other side of the draw, Harrison defeated Horace Greeley and then Long Island power Syosset by identical 4-2 scores. That night, tournament organizer and Harrison Coach Quan Huynh, who doubles as Rye High Boys’ Squash coach in the winter, joined Coach Shea to read the weather report predicting Sunday showers. As luck would have it, Rye Country Day had just finished resurfacing its four-court indoor facility, so the San Marco finals were played indoors.

It was a terrific battle for an hour. Justin Mandell had all he could handle in the first set before his strong serve and all-court play gave him the 6-4 win. The effort seemed to tire his Huskies’ opponent, and Mandell bageled him 6-0 to take the match. Meanwhile, the Weinstein/Felton pairing two courts over was home and dry with their victory before while Mandell was still shaking hands at the net. 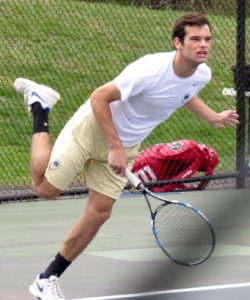 On the next court over, Gabe Smilovic had the opposite experience at second singles. His deep groundstrokes off both wings gave him the first set in under 40 minutes. “And then, maybe, I got a little too comfortable,” Smilovic said afterwards. Whatever the reason, he found himself in a 2-5 second-set hole before launching a comeback that saw him take the next five games for the match.

Jack Miller, stronger than he was last year, is possibly the most improved player on the team. His win at No. 3 singles wasn’t exactly easy, but it was convincing. He said, “Going up against Justin and Gabe every day has made me a better all-around player.”

Miller’s win guaranteed the victory even before the final doubles match was over. Afterwards, with all three Wildcat singles players unbeaten in their nine matches, Justin Mandell was named the tournament MVP.

This One’s For You Albie Collins

Athlete Of The Month: Declan Lavelle

Cook & Comic Podcast: Save The Sound

Boys Will Be Men

The Iron Woman of Rye