Home NewsBusiness & Orgs The Way, Way Back to the City for Trish Agosta

When Trish and Steve Agosta moved to Rye from Manhattan in 1993, it was with great reluctance. “We’re city people, single and married. We like to be able to walk everywhere and be out as much as possible,” said Trish. But, like so many others, they didn’t want to raise their kids in the city. Their first house was on Mead Place, right near train and town. They would never have left that house, but a realtor friend had a listing at Ridgewood and Iroquois in Indian Village. They’ve been there 16 years.

From the day they left the city, however, they promised one another they’d get a pied-à-terre the instant their kids left the nest.

When their son was accepted to Fordham Law School in 2017, they started searching for a city apartment. At the time, Trish, who’d had a successful career in patent law and experience in land-use law and had taught at St. Ignatius in the Bronx, had no visions of a career in Manhattan real estate. But she spent so much time looking at apartments — 75! — with a realtor from Douglas Elliman, that one day the realtor asked her if she’d be interested in meeting with her manager about a job.

“I ended up at Douglas Elliman because of our realtor, and it was a good decision, even at age 54. The firm has a big name in the city, as well as unlimited resources, training, and classes. The atmosphere at the office where I work, 68th and Broadway, is collegial and every agent is ready to step up and help and share,” said Trish.

In the end, the Agostas, who had lost out on the bidding — “week after week” — for a number of apartments, found their Upper West Side apartment on-line. “We weren’t looking for a tiny studio but the one we saw was intriguing because it had a small terrace with room enough for a café table and two chairs and great gardens below. That was all it took,” explained Trish. “Even with the studio, we bid significantly over the asking price and lost out to two bidders, but both of their deals fell through.” 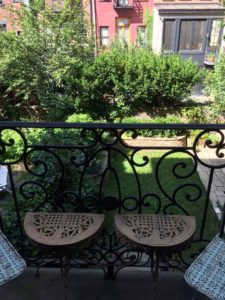 The balcony and the view of the gardens below sold the Agostas on an Upper West Side studio.

Recognizing that Rye would still be home — “it’s where our friends and our children’s friends are” — a studio was all the apartment they needed. “Steve and I look at it as a perfect hotel room. The bed is in an alcove and the layout is very efficient.”

For the Agostas, the best part of finally having a place of their own again in the city is “feeling like we’re 25 again.”

Trisha’s advice for Rye-ites looking for an apartment in the city is: Figure out what the intended use is — second home or little hotel room?

For the Agostas, neighborhood and proximity to green space were paramount. Among the Upper West Side’s attractions are Lincoln Center, the Time-Warner Center, Central and Riverside parks, the 79th Street Boat Basin, livable, friendly pre-war buildings, and plenty of restaurants and cafés. “We joined the Museum of Natural History and have gone to lots of great nighttime events there,” said Trish.

Another important thing for buyers to know about the Upper West Side is that maintenance charges are lower than in other desirable neighborhoods. There are currently 103 two-bedroom apartments for sale there. The average list price is $1.54 million, the average monthly maintenance $2,400.

For buyers in search of a hip, high-energy neighborhood, look no further south than NoMad or the Flatiron District, recommends Trish. “They both have high-end shops and lots of night life. In NoMad, where there are 18 apartments on the market, the average cost is $1.838 million with maintenance of $2,868. In the Flatiron, there are 11 apartments for sale, average price $1.746 million, maintenance $3,248.

Quiet, elegant Gramercy Park remains one of the most desirable neighborhoods. There are currently 18 apartments on the market, average price $1.678 million, $3,109 maintenance.

Needless to say, it’s a great time to buy and, once life returns to normal, be back in the city where adult life began.

More Cases of Coronavirus Here and Throughout County

Hats Off to the Y for Another Splendid...

Nestling in With Nature

A Stitch in Time